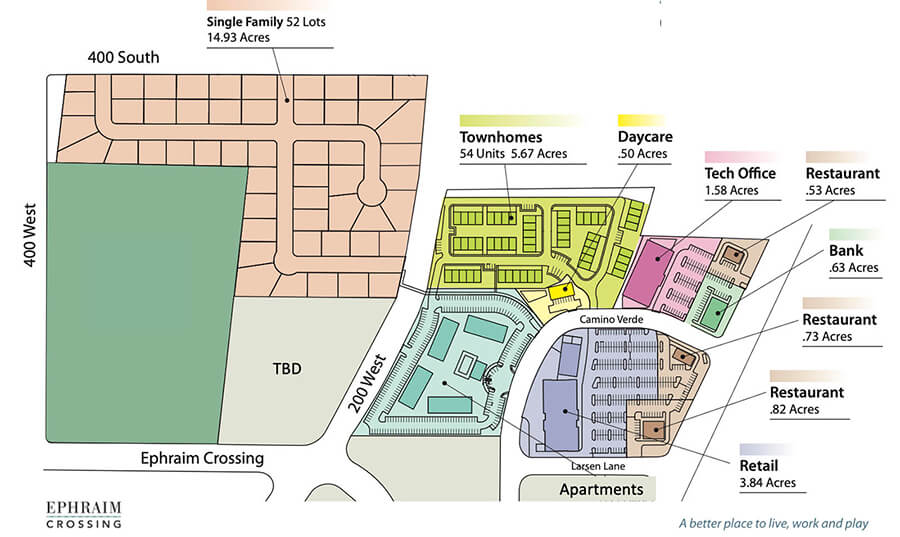 Ephraim Community Development Director Bryan Kimball said his office has been deliberating seriously for the past six months or so with the developer Mike Ballard, managing director of Camino Verde Group (CVG).

Ballard’s company from Henderson, Nev. is proposing to build a 90-acre mixed use development over 10 years on property near 400 South and 200 West.

The development is a mix of single- and multi-family residences, town homes, office and retail space, Kimball said. “It’s a pretty broad spectrum of mixtures there,” Kimball said.

Ballard’s expectations are to build residential dwellings first, with commercial development to follow.

Although the city might want to attract a grocery store, Ballard was clear about the sequence of the development.

Ballard said that Ephraim is an attractive place to do the development because Snow College has a four-year software engineering program that is appealing to technology companies and because Ephraim is relatively close to Provo, Orem and Spanish Fork.

“There are already hundreds of people that commute an hour or more because of the quality of life,” Ballard said.

Ballard also said that CVG likes “college towns.” Ephraim has a lot of opportunity from educational programs, the arts and sports, he said.

The federal government has identified Ephraim as an “opportunity zone,” a program that offers significant tax incentives for new development, and the state of Utah has created incentives for companies to locate in Ephraim.

“In addition, the COVID pandemic seems to have spurred a lot more relocation to rural areas from major metros all over the country,” Ballard said.

Kimball appreciates that Ballard’s company has asked what the city needs.

“It’s not always the case where people come in and say, ‘What do you need?’” Kimball said.

CVG has “backtracked” so it is not “missing any pieces to the puzzle,” said Devan Fowles, Ephraim city planner.

The developer has “paid a lot of attention” to the overall traffic plan as dead-end roads that come into U.S. 89 will become intersections, Kimball said. He agreed that it would be a big deal for Ephraim to have more intersections and a second traffic light, as a result from Ephraim Crossing. “This will definitely drive traffic,” Kimball said.

Kimball said the city will be looking to approve the first phase of the development, which will probably be the construction of single family homes. The project will need the approval of the planning and zoning commission and the city council. For more information, visit EphraimCrossing.com.

This Article was initially published on July 23, 2020 at http://sanpetemessenger.com/